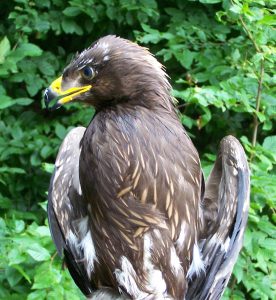 On the 2nd of August 2011 we received from a veterinarian friend of us Borka Levente a juvenile male Lesser Spotted Eagle from Pădureni region (Mureș county). The bird had been found by some workers near a forest. After feeding the bird for a day, we took it to the forest near Valea village for adoption, where on the 7th of July we ringed and tagged with satellite transmitter the chick named Katona (http://pomarina.ro/RO/psri-cu-transmitoare/115-katona). At this nest site we have been making regular observations during the breeding period. Both juvenile birds had similar age, which was the reason for choosing this pair as adopting parents. When we arrived to the spot Katona had already fledged, and was moving around at the forest edge nearby. After we ringed the juvenile bird with both, ornithological metal and colour rin with code, we put him in the nest of Katona`s parents. We waited until dusk to see if the bird spends the night in safety, on the tree. In the next morning the young eagle was still there, but when we approached it flew away and sat in a high tree’s canopy. After this we verified the success of our action every two days. We had previous experiences, as we had already made similar adoptions. Already in the first days we could see that the adoption was a success. The parents accepted the newly arrived juvenile bird and they fed him as their own. In several cases we saw and heard the two birds asking for food simultaneously from different parts of the forest. Later we saw both birds following the parents, begging for food and rising above the forest doing flying exercises.

Good news from Béni ”the Survivor”