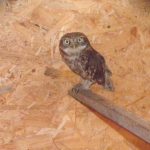 Over these three months 10 new birds have arrived at the Centre, adding to the 6 who are already there. While this number of birds is approximately the same as in previous months, the number of people who contacted us dropped to 16 in this period. As is to be expected in these cold winter months, this has been a relatively quiet period in the Rehabilitation Centre. Among the 10 new arrivals there were 3 Common Buzzards, one Rough-legged Buzzard, 3 Little Owls, one Tawny Owl, one Green Woodpecker, one Common Crossbill. Together with the 6 preexisting residents, 16 birds overall received treatment. Medical interventions went smoothly, with two surgical interventions, 4 birds receiving medication and the others not needing medical treatment but just the opportunity to rest and regain their energy. By the end of the period, 4 birds had perished, 5 recovered and released back into nature, while the other 7 remained in the Centre, waiting for either further treatment or the weather to get warmer before they are relased. The following birds were treated during January-March 2013 (the birds helped by giving advices through phone are marked with an *): 1. White Stork (Ciconia ciconia) – 1 individual 2. Common Buzzard (Buteo buteo) – 5 individuals

Invasion of tortoises at the Rehabilitation Centre!

Healthy Storks miss migration and stay in Romania for winter