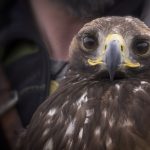 Frail in the beginning, but vigorous in the end, the Golden Eagle released by the Milvus Group flew back where it belonged: in the wild, free sky! The bird arrived at Tîrgu Mureș from Craiova in a serious condition. Levente Borka veterinarian from the Vets4Wild Association suspected a poisoning case with devastating effects. Fortunately, after 4 months of treatment, the Golden Eagle regained its strength and it was released last week. The Golden Eagle (Aquila chrysaetos) is the second largest raptor bird breeding in Romania after the White-tailed Eagle. Specialists estimate between 90-150 pairs living in our country. These birds can be observed in high hillocks and mountain regions. They use warm air to elevate into atmosphere and they usually soar gently through the sky. A true display of power and gentleness! As a curiosity, these Eagles have territories which they use for generations.

The new issue of the Migrans newsletter is available on line

The travelling Golden Eagle – 1700 kilometres in just a few months