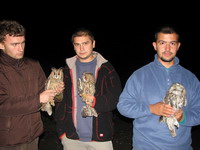 In period of 3 – 9 November members of the Milvus Group went on field to catch different owl species. The target areas were nearby Tg.-Mureș city. During the night field trips, the birds especially Tawny Owls (Strix aluco) were located and attracted into the mist nets with the species call, using a CD-player. A total of 12 Tawny Owls and 2 Long-eared Owls (Asio otus) were ringed. Beside the ringings the aim of these field trips was to gather data about breeding habitat and density of owl pairs. Observations were made on other species too, like Ural Owl (Strix uralensis) and Little Owl. (Athene noctua). As a result of the field research they found 50 locations with the presence of Tawny Owl (Strix aluco) and 9 places with Ural Owl (Strix uralensis). Hopefully the field trips will be repeated next year.

2018: the fifth consecutive year of ringing on Chituc Spit!

The 2012 events from the stork nest with web camera