On the afternoon of September 24 (exactly one month after a similar intervention) we have managed to safely release yet another adult female bear from a snare set by poachers in our bear project’s hillside target area. We were announced by the local hunting association and we arrived on the scene a few hours later. The bear was caught very close to a village, on the bank of a small river. The rescue operation was carried out in cooperation with members of the local hunting association, while the veterinarian assistance was provided by Vets4Wild. Tranquilization went swiftly and without any incidents. Fortunately, the large female escaped mostly unharmed – the snare was caught around her chest and there were no real wounds on the animal. However, she did break and lose one of her lower canines as she chewed on the snare’s cable and broke the surrounding trees. After she fell asleep from the administered drugs, we actually needed to pull her out with a 4WD car, as six of us could not move her (she was very heavy and she was also jammed between some trees). We managed to pull her on a small trailer and before nightfall, we took her some kilometers up in the forest, away from the village and human activity. 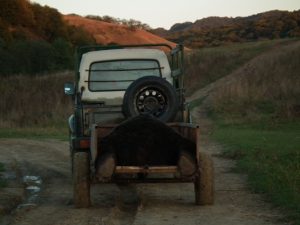 She (named F4) has also received a GPS-GSM collar – the last one we had for 2014. We had to actually extend our collar (which had a circumference of 70 cm), because her neck was just too big. Luckily, we’ve had some leather stripes made exactly for this purpose some time ago. With the aid of this equipment, from now on we can continuously monitor her movements and the way she uses her habitat. We had to wait for more, than 7 hours after release before she started to wake up. Than (at 3 AM) we left her to recover in peace and we went home. The spot was checked the following morning and she had left – her tracks were still clearly visible.

To find out more about our research and conservation activities focusing on brown bears, please visit our project website.

Do they really need saving?