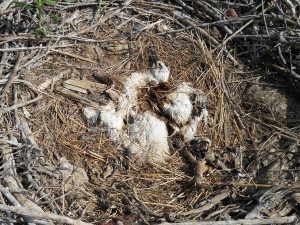 On the 27th of June 2012 members of Milvus Group travelled to Suplac commune (Mureș county), following an appeal the mayor has made. In Idirfaia village, belonging to Suplac commune, the locals have been worried because of the storks which have disappeared in the last one and a half week. For some time they have not seen the owners of the stork nest from the brink of the village, nor have they seen the stork chicks which were already standing on their feet in the nest for some time.The mayor brought a crane car to the location, with the help of which we examined the reason the storks left the nest so sudden. When we got up to the nest we sadly noticed the remains of a stork chick, which probably perished in the last the last one and a half week. Taking in consideration the age of the carcass and the weather conditions in that period we draw the conclusion that the chick died because of the bad weather conditions. A local child, who arrived at the location, confirmed our conclusions, stating that after the stormy weather he found two dead stork chicks under the pylon, which were probably rolled out by the storm.

At the beginning the two adult storks were returning to the nest, but after a while they started building a new nest on another pylon nearby.

The stork and bees

Stork observing game: who will observe first the stork on the webcam?