The number of birds arrived in the Rehabilitation Centre decreased between October-December compared to the previous period. Fortunately this year we didn’t have to confront the usual high number of weakened birds from early winter as we expected, as the temperatures were low and the snow cover was thick. Although the number of persons who contacted us was significant (33), relatively few birds, only 11 individuals were transported to us. Other 12 birds were treated directly through telephone advices.

Unfortunately resolving the transport of the birds still remains one of our biggest problems. Another problem is that the birds often arrive too late to the Centre, and in the meantime they are sometimes kept inappropriately. There are some people who think that keeping a wild bird at home is very exciting. These people call us when they realize they cannot keep the birds any more or they just simply get bored of them. The biggest problem is that in most cases it is already too late for these birds to be saved.

At the beginning of the period we had 6 birds: one Saker Falcon, one Common Buzzard, 3 White Storks and one Hobby. 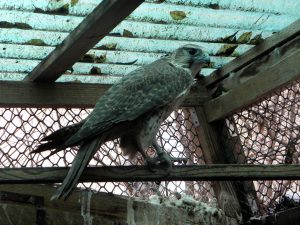 Our Rehabilitation Centre received 11 injured birds (one Short-toed Eagle, 3 Common Buzzards, one Northern Goshawk, one Saker Falcon, one Little Owl, one Long-eared Owl, one Great Spotted Woodpecker, one Rook and one Yellowhammer), thus the number of treated birds was 17. There were 5 surgical interventions, 6 birds perished, 5 birds recovered and were released back into the wild, while 6 birds remained in the Centre.

The following birds were treated during July-September 2012 (the birds helped by giving advices through phone are marked with an *): 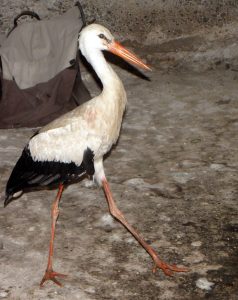 In this period we started building a Rehabilitation Centre at the house of Milvus Group from Sânsimion (Mureș). There we will build some large cages where the treated and the recovered birds will rehabilitate. We hope that because of this, from spring we will able to accept more injured birds.

The case of October

On the 12th of October we received a phone call from Dăbuleni (Olt) about a raptor, suspected to be an eagle, which was at a veterinarian. After we looked at the pictures we realised that it was an adult Short-toed Eagle, a relatively rare species in our country. The bird had an injury on its left wing, with an open wound at the end of radius. We find out that the person had the bird for one month and fed with pork! In the following days the bird was taken by our colleagues, who were on field in the southern part of the country.  After a detailed study and radiography the same injuries were identified as communicated by the keeper. The Short-toed Eagle refused to eat, thus we had to cram the bird. However, it’s condition got worse and on the 30th of October the Short-toed Eagle perished. After dissection our veterinarian found sediments of uric acid (gout) on the vital organs. This disease is manifested by disturbances in the metabolism – irreversible phenomena – and is caused by the uric acid accumulation (from the pork meat in this case), which the bird consumed. In other words, the inappropriate feeding of the bird by the person who kept it caused the death of this bird, which is not surprising because Short-toed Eagles are specialised in consuming reptiles.

The case of November 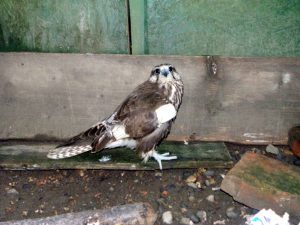 At the beginning of November we received a call about a Saker Falcon, unable to fly, kept at the office of the Mureș Floodplain Natural Park. Our colleague from Arad, Luca Dehelean immediately took steps and the bird arrived to Tîrgu-Mureș on the 6th of November. After examination and radiography shooting and fraction were eliminated but joint lesion was detected on the extremity of the humerus on the left wing. The wing was immediately tied with bandage, but it hasn`t shown any healing until the moment. The bird is still in the Rehabilitation Centre, itis eating well and is in good condition. We hope that the bird will be able to fly, but these injuries heal really slow. We remark that the Saker Falcon is one of the rarest species in Romania; there are less than 10 breeding pairs.

The case of December

On the 5th of December Constantin Săbăngianu from Constanța called us because he had found a Long-eared Owl hit by a car, with multiple fractures on its wing. The bird was taken to several veterinarians, but nobody undertook a surgical intervention. The reason for this is either the hopelessness for a successful operation, or the risk of the anaesthesia, which is really hard in case of wild animals because of the high adrenalin caused by stress. Having no other choice to transport the bird, Constantin Săbăngianu brought the owl personally to Tîrgu-Mureș on the 6th of December. The bird had 3 fractions on the humerus, indeed, and it was really weak for a surgical intervention. However, the fraction was really serious, and after 4 hours the operation already started. The operation and the anaesthesia both were successful, but the bird lived only 6 hours after. We consider that this was the last chance for the Long-eared Owl to survive, and we gratefully thank Constantin Săbăngianu for his devotion.

We would like to thank those who asked for our help and especially to veterinarian Levente Borka from Tîrgu-Mureș for his fast and invaluable help.

In the name of the Rehabilitation Centre,