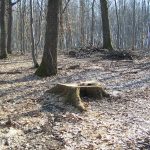 From 2011 the movements of a Lesser Spotted Eagle can be followed through satellite: in the frame of the „Conservation of Aquila pomarina in Romania” LIFE project the ornithologists of Milvus Group mounted a satellite transmitter on the back of the adult male named Jobbágy. Currently the bird is near Congo, he`s hurrying back to his nest near Valea locality, where he has been breeding successfully in the past years, but he will only find a cut tree instead of the oak with his nest. END_OF_DOCUMENT_TOKEN_TO_BE_REPLACED