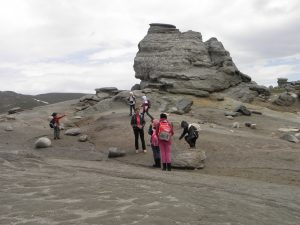 Last week, on the 13th June, the young finalists from the “I also take part in Natura 2000” contest were invited on a one day excursion up in the Bucegi Mountains. Drawn from years II-V, a total of 27 pupils were accompanied by six teachers and four members of the Milvus staff up the mountain, travelling from Bușteni by telecabine up to the Babele and Sfinx peaks (2216m). Accompanied by guides of Bucegi National Park, they descended down to 1400m by foot, admiring the surrounding landscape on the way.