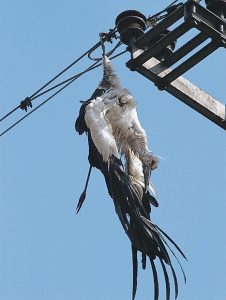 Tragically but true, the medium voltage pillars in Romania seem to be a major threat for the migrating storks on their way to Africa. This is also the story of a bird equipped with a satellite transmitter from Poland, which lost its life on such a pillar in Cehul Silvaniei, lacking the scientific community of important data on the migratory routes of these birds, with otherwise very few natural predators. Another gloomy picture of the phenomenon is offered by the nine dead storks electrocuted on five dangerous pillars in Bihor County! And this are not singular cases. The Rehabilitation Centre has received in recent week’s dozens of calls regarding storks injured or electrocuted on such pillars in several regions of the country as Iasi, Bârlad, Suceava, Arad, Timiț, Satu Mare, Mureș, Oradea. We consider that these pillars are particularly dangerous, endangering the very existence of birds, which in the absence of trees, choose to rest on these supports. Although Romanian energy companies are aware of the problem, the solution for the situation is awaiting. Through an international project implemented in Western Romania, the Milvus Group, in cooperation with Enel Banat, will isolate several thousands of pillars of medium voltage powerlines. An important step forward, but still, just a drop in an ocean.

Winners of the WEBCAM BERZE contest

The storks are coming – COMPETITION!

A stork with colour ring is “visiting” the nest. Will it occupy the nest?