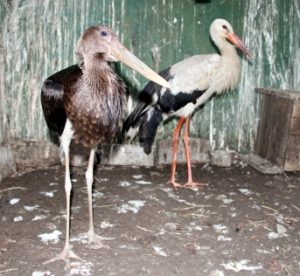 Between January and September 2013, 89 birds were bought to our Centre- an average of one new arrival every three days. We try to accomplish all requirements and to provide shelter for every bird which arrives at the Centre, but unfortunately there were no free bird cages in this period. The Centre is run as a collaboration between Milvus Group and Vets4Wild Association, a group of veterinarians who dedicated their work to safe wild animals from our fauna. If you have any questions you can contact them on their website: www.vets4wild.ro. We would like to thank those who asked for our help and especially to the veterinarians Levente Borka and Lóránd Köbölkuti from Tîrgu-Mureș and Merești respectively, whose fast and careful help was invaluable to us. Also, special thanks to Lajos Pál from Odorheiu Secuiesc, who donated us a cage! In the name of the Rehabilitation Centre, Róbert Zeitz

I found an injured bird, what should I do?