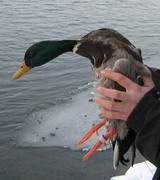 On the 10th of January 2008 aweakened Mallard (Anas platyrhynchos) was found in Târgu Mures by Domokos E. The bird was handed in to the Milvus Group and after a quick examination we could not detect any external injuries or fractures. After monitoring the bird in captivity for one day we decided to mark the bird with a ring and release it at the barrage on the Mures River. Due to the open water surface this place is regularly used by wintering waterfowl. After releasing, the bird swam directly to a flock of Mallards and mixed with them. One week later it was seen on the same spot, swimming and preening.

Do they really need saving?