The events in the stork nest with the mounted web camera from Dumbrăvioara could be followed this year also on the Milvus Group webpage, unfortunately with some interruptions. In this year the camera was changed to a night-vision one, thus the storks in the nest were visible also in the dark.

Same as last year, this year the events turned out very interesting and surprising.

The first stork arrived to the nest on the 26th of March, one week earlier than last year. After this the stork was alone in the nest for a long period, while everyone was waiting impatiently for its pair to arrive. Last year after 5 days there were already two storks in the nest, but this year there was just a single stork until the 25th of April.

During this period interesting events took place in the nest: on the 18th of April an intruder stork was seen in the nest. On the night from 22-23 April at 3:57 AM the single stork laid an egg, thus it turned out to be a female bird. Usually it is male storks who occupy the nests when they arrive. But at 5:51 AM she threw out this egg from the nest. 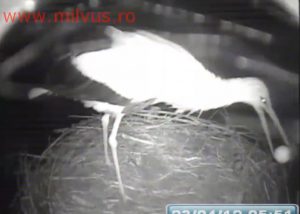 Further on the events from the nest could be followed only in spots because of some technical problems. On the 7th May the stork pair had already 3 eggs in the nest. On the 4th of June during a storm a lightning hit the camera, and as a consequence the computer went down also. The transmission went off again until the 15th of June, when everyone was surprised to discover that there was just one chick in the nest. We don`t know what had happened with the other two eggs, as we haven`t found any eggs or chicks under the nest.

On the 29th of June the chick was ringed. In the beginning of August the chick fledged and in the end of the month the stork family left the nest.

We apologize for the technical defects and for the transmission brakes and we thank those who enthusiastically watched the events of the stork nest. We hope that we’ll be able to follow similarly interesting events in the nest next year too!

Stork observing game: when will the stork’s pair arrive?

Our ringing activity in 2019