Thanks to your interest and to your love for these birds motivated us to install a second webcam in this village, Dumbrăvioara, Mureș County, quite known for its hospitality for storks. Therefore, we’ll be able to give us additional and new images from the life of these birds each year.

The project is financed by the Environmental Partnership Foundation’s Green Spaces Program and MOL Romania.

It’s been 13 years since the first webcam to record the life of storks was installed in the village centre. Furthermore, should you ever find yourself in this area, coming in from the National Road 15, you may notice a stork nest almost on every electric power pole.

The White Stork, one of the most popular bird species, shows a tendency to live near us, humans. It certainly is beneficial for both parties!

The impressive nests are renewed year after year by both the male and the female. The storks feed on shallow wetlands and agricultural lands (pastures, grasslands, fallows) and their diet changes according to the season: rodents and insects (locusts, grasshoppers) in dry weather conditions, and aquatic animals (frogs, snakes) in rainy intervals. Generally, they raise 3 to 5 chicks, depending on the weather conditions and the available food resources.

Via our webcam, you will have direct access to the most important time of their life. We know you’re great fans. In 2017, we registered over 35,000 viewers. Thank you for your visit and we hope you’ll follow the storks this year, too!

Dear friends of the storks, in the last few days we encountered technical problems with the live transmission from the Dumbrăvioara stork nest. We apologize, but these problems are sometimes unavoidable. Still, our contest continues. We are waiting for print screens with the first stork from the nest. 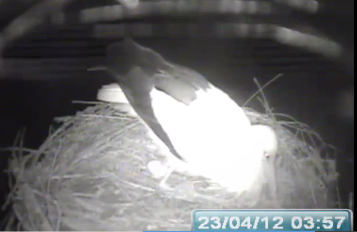 Interesting discovery in the stork nest from Dumbravioara, during the night from 22rd to 23th of April: the “male” who occupied the nest (as we supposed, because usually males are occupying the nests) is actually a female. She laid the first egg at 03:57 a.m.

Seems like that we are witnessing the same events as last year (Link). Stay with us and watch the “soap opera” from the stork nest from Dumbravioara… 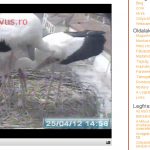 On 25 April 2012 at 14.56 PM Bartók Csaba was the first who observed the stork’s pair on the nest from Dumbrăvioara! Congratulations! END_OF_DOCUMENT_TOKEN_TO_BE_REPLACED