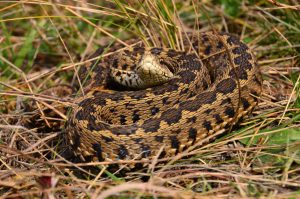 History has been hard on the Hungarian Meadow Viper (Vipera ursinii rakosiensis). A subspecies of the grassland dwelling meadow viper (Vipera ursinii), it has been persecuted under the false fear that it may be dangerous, caught and sold as pets and poisoned by agricultural chemicals. Most devastatingly though, this once widespread subspecies has had its habitats increasingly destroyed as changes in land use have seen it’s native grasslands being ploughed for use as arable land, overgrazed and burned, forcing the viper into ever smaller pockets of protected land. END_OF_DOCUMENT_TOKEN_TO_BE_REPLACED

Continue ReadingIs this the end for the Hungarian Meadow Viper?