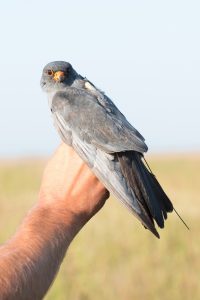 Following their long summer preparing, Red-footed Falcons start their migration in early autumn. On their way to south they roost in flocks of varying numbers (from a few individuals to even more than a thousand) on groups of trees. As they are faithful to their roosting sites, they arrive to these places each autumn. Milvus Group has been conducting Red-footed Falcon counts on roosting sites for several years now. Every week from mid-August until the first week of October synchronous observations are made in the Romanian, Hungarian and Serbian Red-footed Falcon roosting sites. Similarly to past years, this year observations have been made in 6 sites in western Romania (here we would like to thank all those helping us in these observations!). END_OF_DOCUMENT_TOKEN_TO_BE_REPLACED