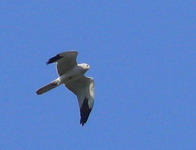 Starting from 22nd September members of Milvus Group together with members of Istanbul Birdwatching Society are observing the migration of birds of prey at the Bosphorus strait, which is well known as one of the most important migration route for soaring birds in Europe. Observations are made at 4 countpoints simultaneously. The migration study camp will last till 13th October.

The article about the results can be downloaded here: Autumn migration of soaring birds at Bosporus: validating a new survey station design