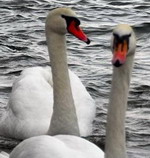 In early January 2008 Kovrig Z. informed us about the presence of three (two adult and one juvenile) Mute Swan (Cygnus olor) on Târnava Mică River in the centre of the town Sângeorgiu de Pădure. The birds arrived on this sluggish unfrozen river course after the Bezid Lake frozen, where was observed few time during late autumn. This species is considered fairly rare in Mureș County and it can be seen very rarely also on the Mureș River and the important fishponds.